Update: My husband told me I'm thinking too much like a girl and that I should have included the final score. So here it be: 4 Paris 2 Evian  (that means we won!) 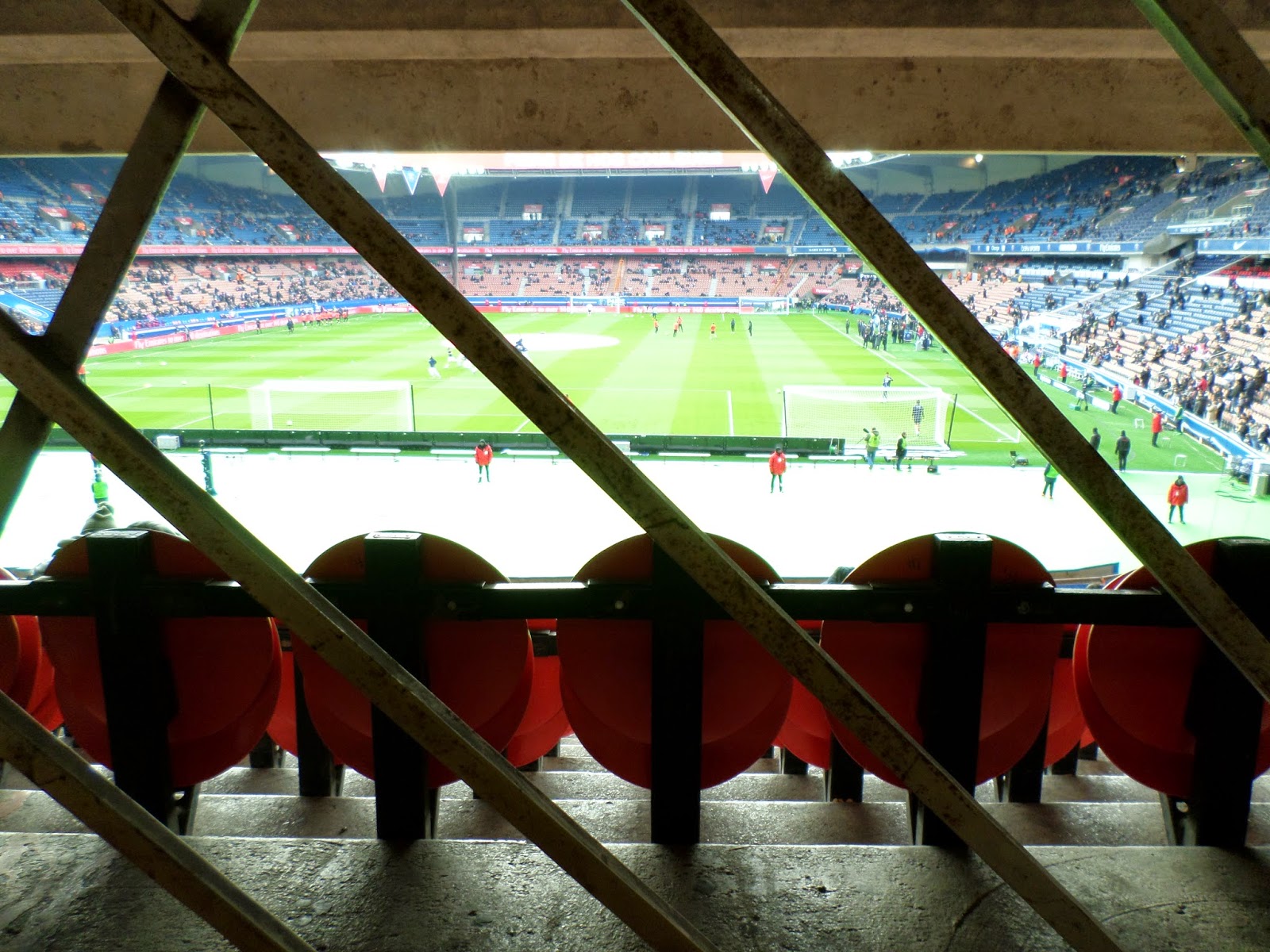 There is this soccer team here called PSG. It stands for Paris Saint Germain and you say it like "Pay Ess Juh-ay). Our national team isn't always something to write home to Mom about but our Paris team, well they're another story. You see, a couple of years ago Qatar bought PSG. Yes, I really do mean the country of Qatar. And being that they are, how should I say it, uh, rich, they have been able to bring in a lot of big names. Currently we've got Zlatan Ibrahimovic (if you're as clueless as me here's the wikipedia link) and not so long ago David Beckham had a brief stint chez nous.  (side note: it's really too bad that he and Victoria decided not to bring the kids across the Channel--I was really hoping they'd enroll them in our school so that parent teacher conferences might be a little spiced up....haha, yes I did just say that...)

Matt is a big fan of the PSG team and has made it a personal challenge to never miss telling me the score from a game. He knows that I don't really give a hoot and I think I've decided that his tactic is to persist, persist, persist in the hope that someday I'll grudgingly become a fan. Ironically, he also employs this strategy with classical music but I digress... So while I don't really like watching a soccer game on TV, I figured I could bite the bullet and give the whole 'live performance' bit a go. For Christmas I surprised him with two tickets to a PSG game against Evian (yes, where the water is from). 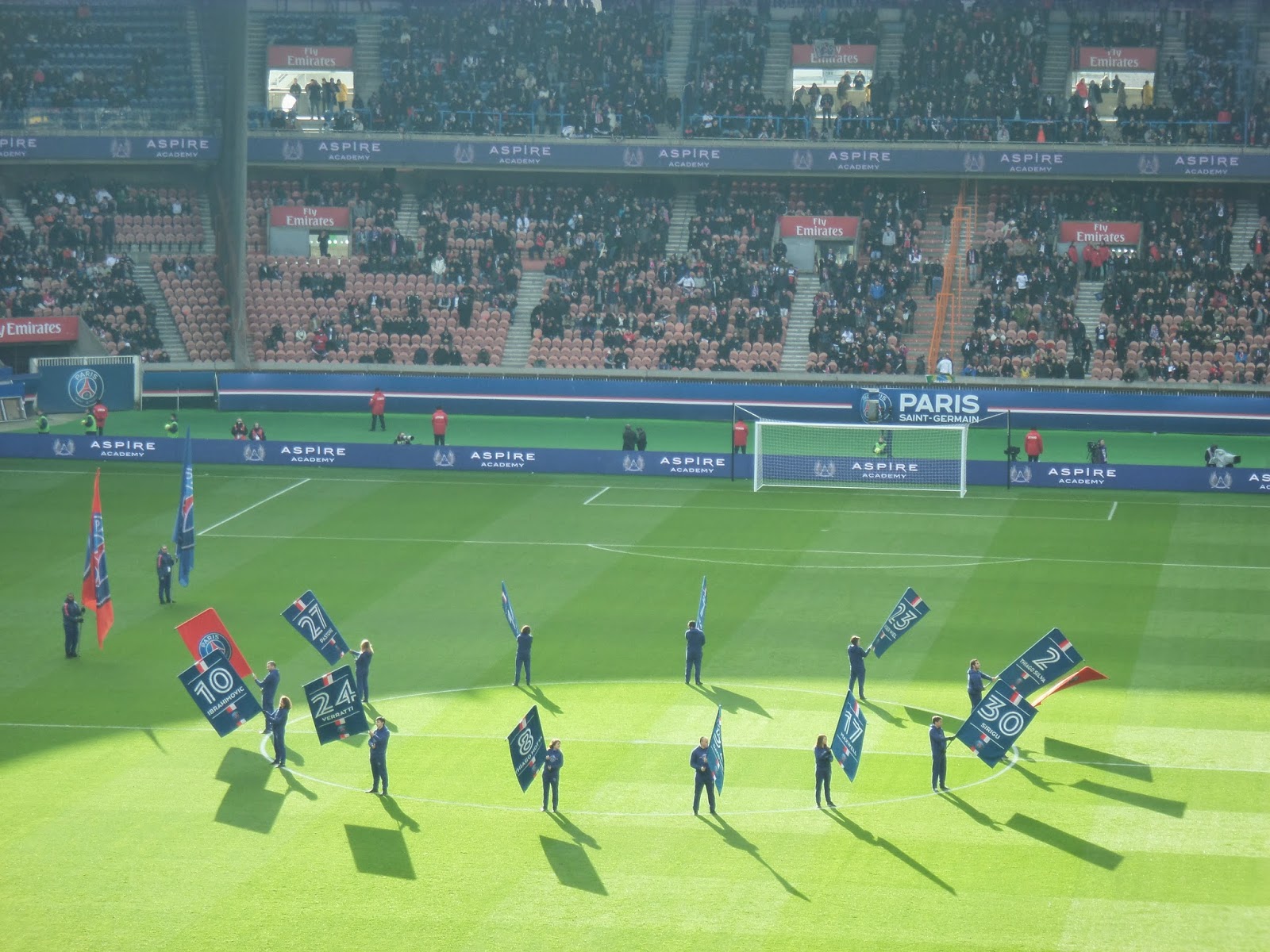 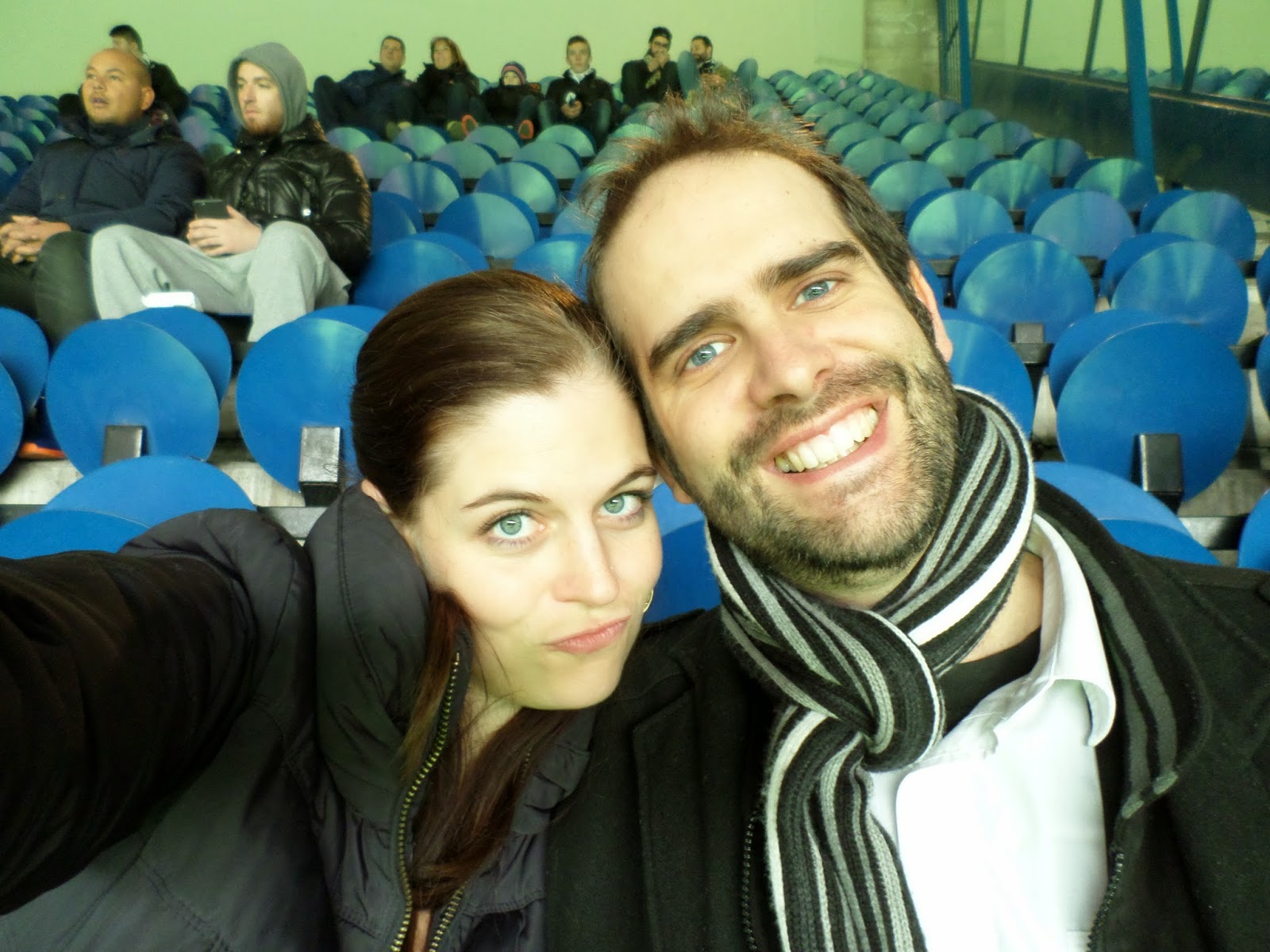 We bundled up, waved goodbye repeatedly to the Livster (who was spending the afternoon doing the whole playdate thing with friends of ours), and embraced our temporary freedom by following the rambunctious sports fans on the metro. The weather was gorgeous, albeit freezing. All in all it was a really fun date as well as highly informative. Here's some of the life lessons I took away with me:

1. Security (heightened due to the recent terrorist attacks) does not like cans of diet coke (that's right, we will aspartame you all to death so watch out.)

2. The options for said coke cans are to chug or dump. Dumping a perfectly good can of pop is against my religion so we chugged. A lot. In front of security. If I didn't hate hashtagging so much I'd write #awkward moment.

3. Chugging a can of coke has consequences: a) your body goes into hypothermia as a result of having ice cold pop thrown into it during freezing temps b) you have to pee, and I mean really.

4. If you are of the lady persuasion, do not go to the bathroom. Qatar clearly spent all its mula on Ibrahimovic and didn't have any left over to spare for things like a garbage bin, paper towels, soap, or even toilet paper.

5. Later on I see a bunch of beer-filled men also using the ladies restroom and that seals the deal. No more peeing until home. 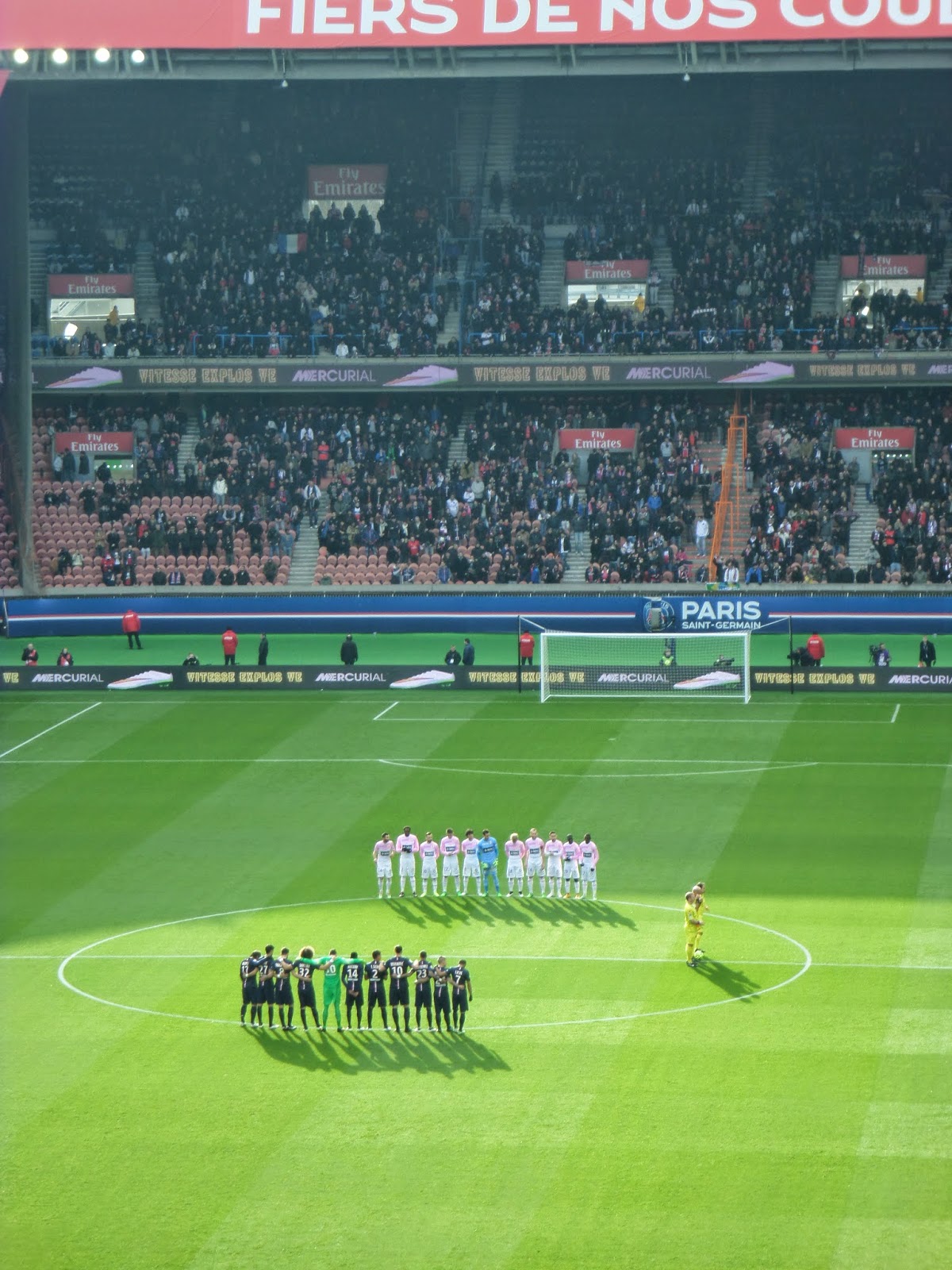 6.Unless you pay better money than we did, expect seat assignments to be a very loose concept.

7. The sports arena is the modern man's attempt to go to war. There is everything you need: war paint, drums, chants, flags and lots of old fashioned trash-talking.

8. The chants are the arena's way of separating the true fans from the fakers. I gave up trying to figure out all the chants and decided mouthing watermelon would serve my purposes just fine.

9. The terrorist attacks reached even the sphere of the stadium: we held a moment of silence for each of the recent victims.

10. Scoring on your own team is bad. It will probably make the little man in the coaches boxes very animated.

And there you have it. My life changing encounter with PSG aka going on a date with the hubs. 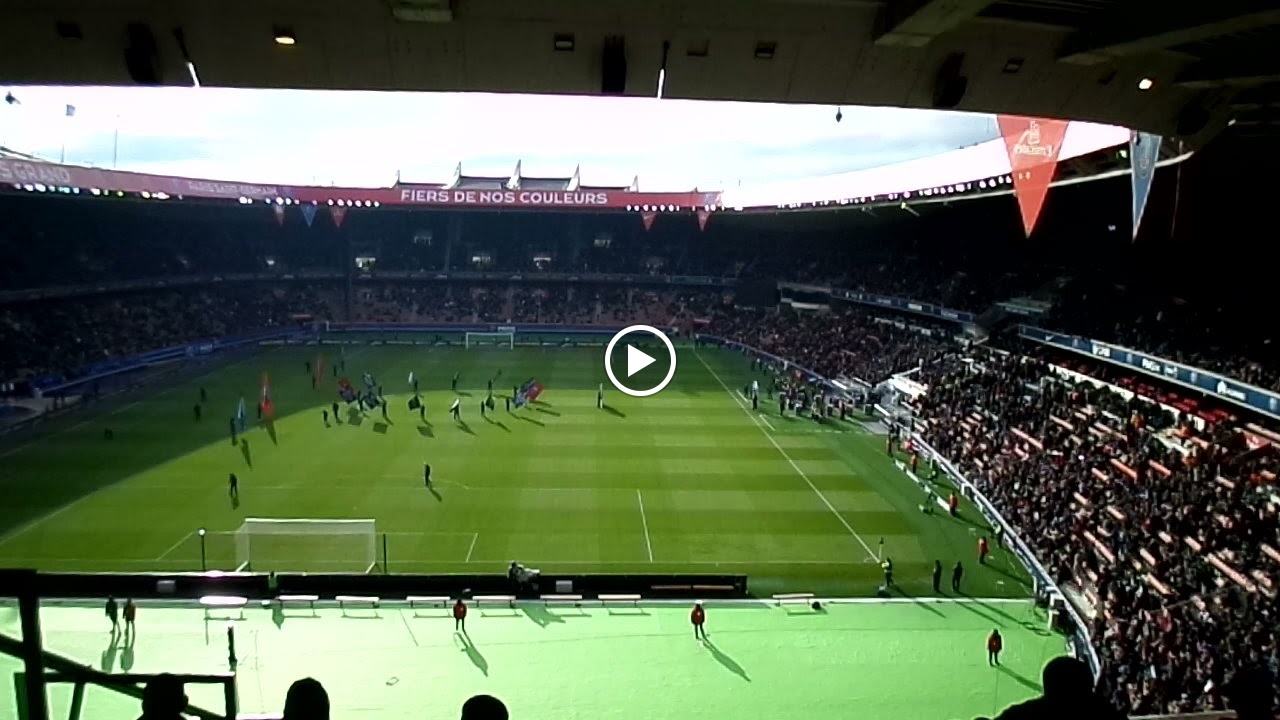 Sounds like you had a lot of fun. When you're my age, you learn to always keep a spare tissue in your pocket for just such occasions! love you, mom