In Honor of Back to School Month: A Diary of a Sanders Vacation in the South of France 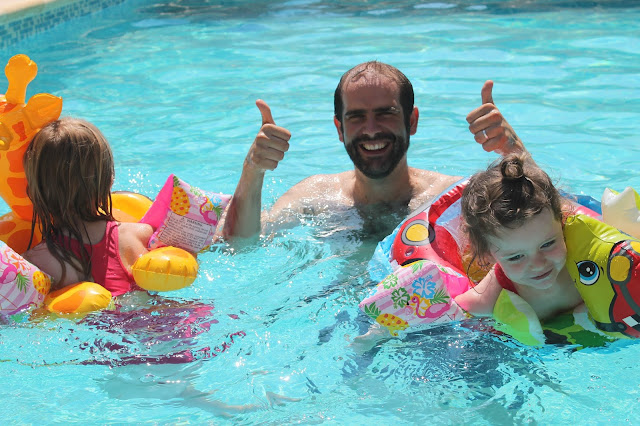 Dear diary (Day -1):
We are finally going on vacation. After giving birth, packing up our house, and moving, we are going on a much needed family trip to a Christian center in the middle of nowhere down south. Goodbye concrete, hello sun. I can't wait to get this trip started.

Dear diary (Day 1):
By I can't wait to get this trip started apparently I meant I could wait. It took us 2 hours to get out of Paris between vacation traffic, nursing a newborn, and a last minute stop at Decathlon for travel sleeping bags. Once on the road the adventures were far from over: after 10 years of backseat driving I lost the toll booth ticket at one of the rest stops. Ever the brilliant problem solvers, Matt and I decided to turn around and go back to look for it...not realizing that meant exiting the highway. The fine for losing a ticket is to pay the rate for the entire highway. It occurred to us 5 minutes after said paid fine that it might have been a smarter idea to go as far as we could before exiting rather than pay the entire highway's worth after only a half hour of highway driving. Just a thought. It was an exhausting day; we managed to make progress but really only at a snail's pace due to stopping to feed Ruben all the time. And as (bad) luck would have it, there are two suburbs of Macon with the exact same name and only a couple kilometers from each other. The only difference is, one had our hotel and the other didn't. I knew when we pulled up in front of that school that something had gone a little haywire.

Note to self: remember not to pack all our extra condiments and food for the trip next time in the newborn travel bath. And especially, do not put a bottle of vodka in it for some mixed drinks you plan on making once the kids are in bed. Bathtubs are slippery things and when stopping at the gas station they just might slip out when the trunk is open and then specified vodka will be in a million pieces all over the ground.
Additional note to self: don't pack the baby carrier next to slippery bathtub or it too might end up on the ground with the wet vodka and now every place you stop afterwards will have your son smelling like vodka. 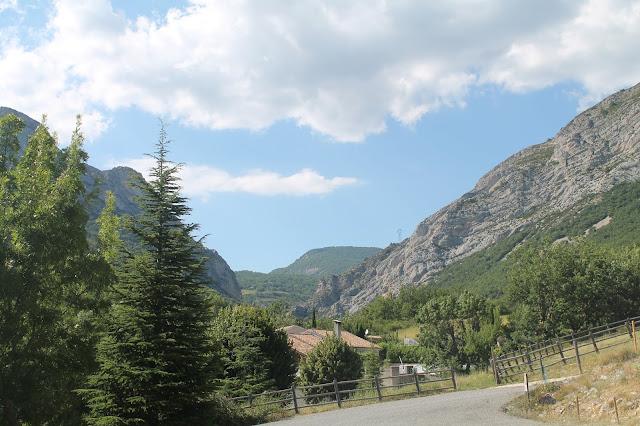 Dear diary (Day 2): It's a darn good thing we decided to break this trip up by stopping at Macon for the night because I'm not sure how long we would have been driving before arriving otherwise. The kids were thrilled to discover McDonald's for breakfast and we were thrilled to discover a restaurant where they couldn't break anything. After very slow but admittedly steady progress, we arrived at the village of Entrepierre. The center is a center for people or families in ministry and we were immediately in awe of this historic village and it's mountainside surroundings. 2 things decided to greet us upon our arrival besides the village and its scenery: Noah-worthy rain and a small scorpion on our doorstep. 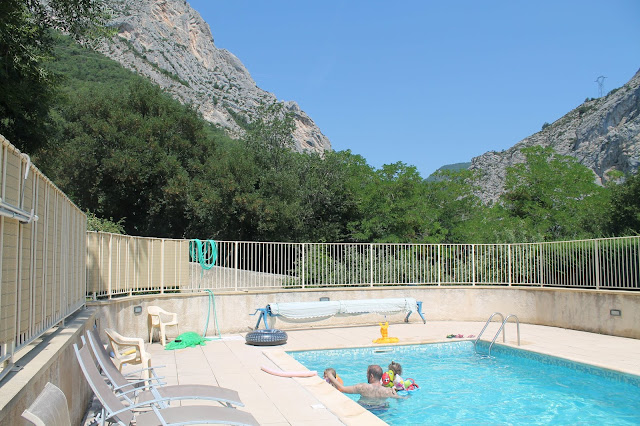 Dear diary (Day 3): Although the scorpion didn't survive, today I found another intruder in our living room. Ever the quick thinking bug killer, I took the closest empty jar I could find and stuck it on top of the beetle, hoping that my toddler wouldn't go investigating for at least another 48 hours. The girls were anxious to explore the pool so like any good parents we smothered them in sunscreen and blew up Lord knows how many floaties and walked to the pool. Life was very good for a short lived while. The problems started when I decided to take Ruben (in his bouncy chair) back to the house to nurse. The door clearly was against me and after struggling in vain with the key for 15 or so minutes, I decided it was outright hostile. So back I went to the pool to get Matt to switch me places and help. That was when Isaline decided it would be a good idea to start training for a marathon, poolside. I tried to tell her off but she couldn't hear me because she was too busy faceplanting. It became clear from the blood gushing from her upper lip that she had cut it open and that blood wasn't going anywhere but out. Thankfully Isaline is okay and while I'd like to say she learned her lesson today, she's a toddler so we all know how that'll work out. 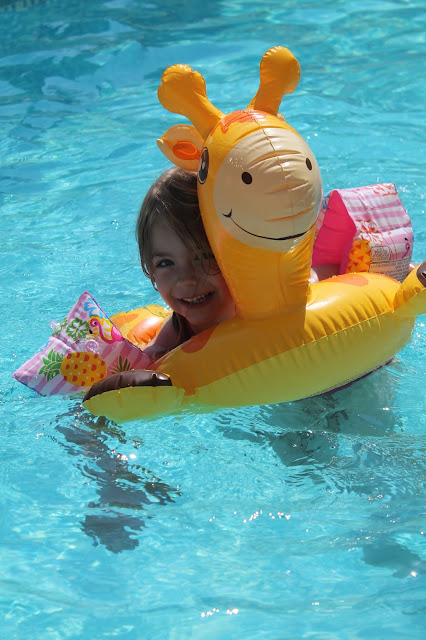 Dear diary (Day 4): In the interest of keeping things kid friendly today, we decided to plan a picnic at the center and visit the local berry farm in the afternoon. The picnic went fairly well but then afterwards I had to go and get all pedagogic. I believe that was my downfall. You see, when we arrived, there had been a bowl of fruit on our table to welcome us and it turns out that it had come from the center garden. I was right in the middle of a really great teaching moment explaining to the girls where the fruit had come from (the mirabelle tree we were standing underneath i.e. not the grocery store) when it started raining beetles just inches from my face. Unfortunately for me, these beetles were not the kind that I had found in our house a few days prior--that one was an inch long at best--these, however were 2 1/2 inch long black beetles falling on me. That left only one course of action: jump up and down while screaming in fright like a 2 year old. I'm not entirely sure if my girls retained much from the lesson. 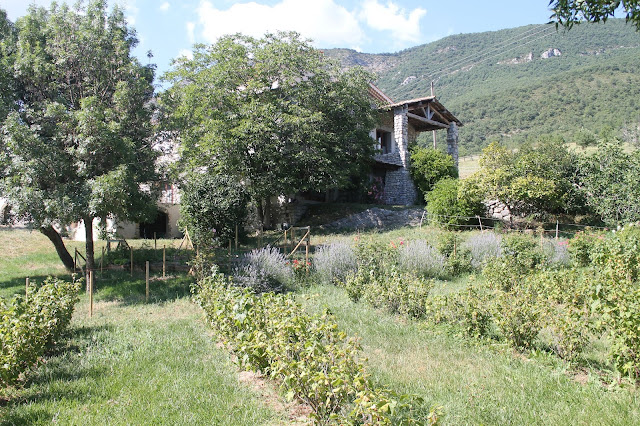 Later we decided to check out the farm which apparently had an "activity trail" which was like a guided tour which led us around the farm. Of course by "kid friendly" they really meant more like triathlete friendly with it's steep drop off, near kilometer trail, and scorching sun. It became appropriately nicknamed the 'farm from hell' because, well, two bawling kiddos and a newborn...enough said. 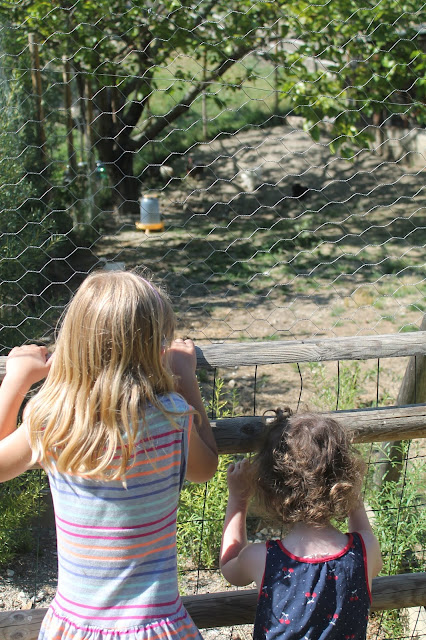 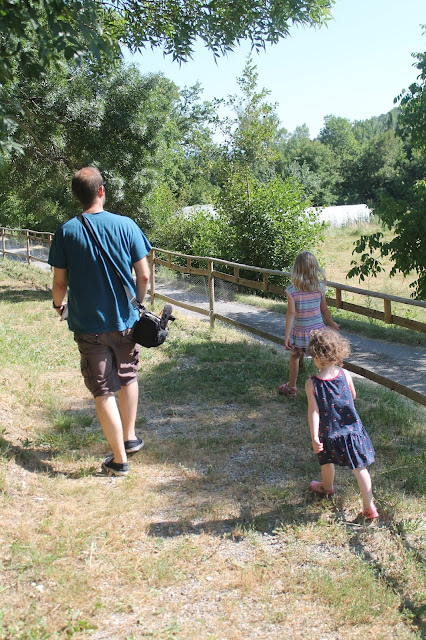 Dear diary (Day 5): Today we thought that since 'kid friendly' had failed us, we might try 'adult friendly' and get all cultural. We hiked around a mountain top town (what they call a 'perched village' around here) but the only problem is that it really truly was on top of a mountain. I think I used up most of my mommy nag cards and just about peed my pants in fright every time the kids got near a ledge. Deciding after the fact that it was a bad idea to attempt site seeing with young kids, we started hunting for an easy place for dinner. Attempt number one led us on a 45 minute goose chase that ended with a closed restaurant and me sitting on the side of a country highway alone with our children and nursing Ruben. Thank you Waze. Attempt number 2 was McDonalds but before we could get there we stumbled onto an asian buffet that looked just about perfect at the time. Of course if we had known that it would cost us Livia's future college tuition to eat there or that Isaline would accidentally fall off the booster chair, grab the tablecloth, and take down half the table (including our drinks) on her way down, we might have reconsidered. Despite cranky parents and a 2 year old that smelled like diet coke for the rest of the evening, we did manage to make it to dessert with only half of the restaurant staring at us. 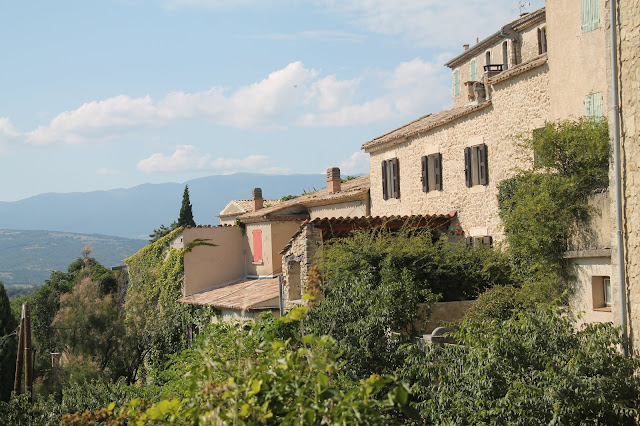 Dear diary (Day 6): Back to picnics and a nearby water play area. The natural wildlife has unfortunately been getting to Livia this week--she has now developed a paranoia of all things small and alive. The worst are the bees but even butterflies have been making her drop everything, scream "peur, peur, peur!" (fear, fear, fear) repeatedly and latch onto my arm. If she would stop doing it while I am either nursing her brother or spreading something on bread I would greatly appreciate it. She also has developed a Dora the Explorer obsession and keeps yelling "backpack" and "we did it!" at the computer screen. 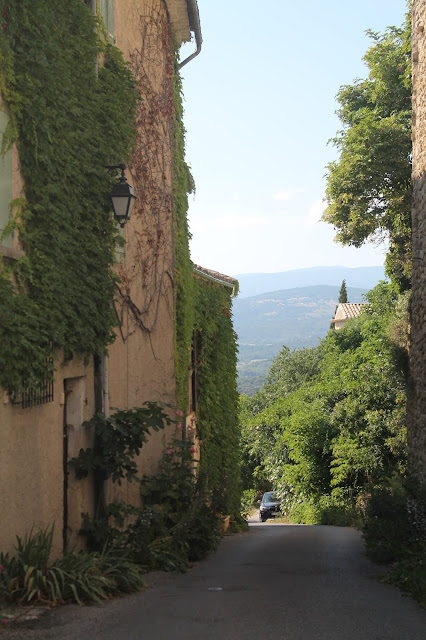 Dear diary (Day 7): Today decided to get started with a bang. A literal one. Lighting struck our house and we lost power temporarily as we were trying to pack up. Next Matt lost his bank card. Thankfully he found it before we had to leave. We made it back to Macon and stayed in the same hotel we had stayed in the first time on the way down there. Admittedly, it was a less than ideal setting to watch France play in the world cup game. Even less ideal because we had gotten McDonalds again to go this time but they had left out a few important pieces like straws and whatnot. The cherry on top however was that we once again found ourselves in the middle of a thunderstorm and as a result the electricity went on and off the entire evening and even into the morning because lightning had struck the hotel. I say less than ideal because despite only mediocre cheering from the Sanders clan (I was mostly busy yelling at the girls to not get ketchup all over the bedding), France still won. 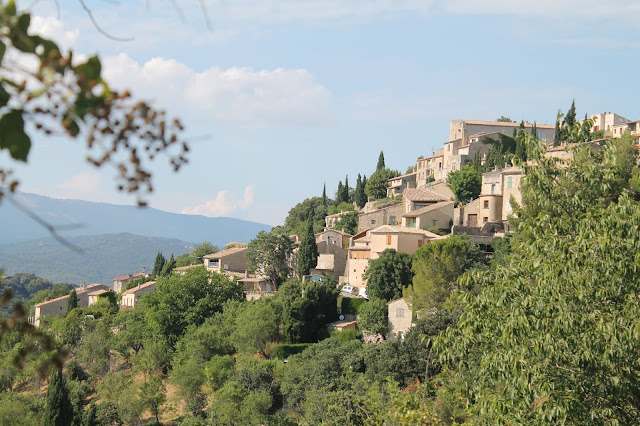 Dear diary (Day 8): We're back in Paris now. After surviving beetles and scorpions, I think I'm up for surviving the Paris metro now. Despite our adventures, vacation was still worth it. But I have to admit, I'm glad to be home :)
Posted by Talia at 3:37 PM

Brilliant! Several laugh-out-loud reactions from me! You have a real talent - as well as an accident-prone streak perhaps!? Thanks for sharing. Great holidays like that help us appreciate home comforts.

Haha thanks Valerie! Defenitely the accident prone streak for sure! (I'm totally accident prone and Matthieu is clumsy/absent minded so it often makes for interesting adventures!) Blessings!