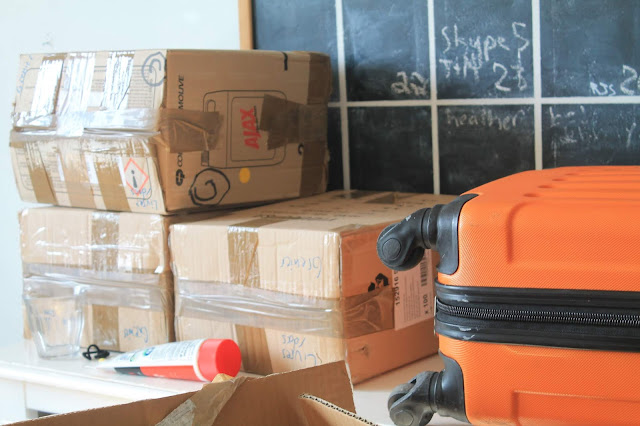 It's official: the Sanders family has moved! Not very far though; although, I wouldn't be surprised if moving here feels like living in another world. We've actually moved back to Paris proper. For those of you who were unaware that we were not living in Paris, consider yourself informed. We've been living in the close suburbs of western Paris-area, basically a 15 minute train ride away from actual Paris. It's hard to believe, but it's been about seven years that we've lived here! That's actually the longest literal place that I've lived in my whole adult life. Even if you're counting cities and not apartments, I only lived in Seattle during my college days for just under 5 years. Our church's senior pastor retired back in January and since then, the church parsonage has been sitting empty, just waiting for some new tenants :) Some of you might be thinking, 'But didn't you guys just have a baby as well?' Why yes, yes we did. Ha! I wouldn't recommend the combo but for a lot of various factors that I won't really get into, this is the timing that we got.

Here's a few little factoids about the new digs (pics to come at a later date!):

--We'll now be only about a 20 minute walk from the Eiffel Tower (I hear those wheels in your heads churning...you're wondering if we'll have a guest room in the new place, aren't you!)

--Napoleon is buried there (not in our new place, but down the road, lol...)

--Paris is divided up in a circular pattern like a snail (oh how fitting!) and cut up into neighborhoods called 'arrondissements'. They're numbered, so we're in number 7.

--In 2011, the population in the 7th arrondissement alone was 57,786... That's actually more than my hometown of Albany, Oregon ! (And the 7th is considered to be one of the less populated Paris neighborhoods!) Compare that to the surface area of the two places and the 7th arrondissement is more than 10 times smaller than Albany! (4.09 square kilometers compared to 45.97)

--It is stinking rich. One of the richest in Paris. But you might not know that just by walking around. It is a place of old money; people have been wealthy since the beginning of time and apparently don't feel the need to flash their bling around.

--This follows my last point, but since the 17th century, it has been home to the French upper class and aristocracy.

--There are a ridiculous amount of public demonstrations that take over the street our new place will be located on. Yes, my husband has told me before that he couldn't get back home right away because of the tear gas lingering in the streets!

--The place was actually a very old home originally which is extremely rare in Paris proper (we mostly have apartments in Paris).  When the church started meeting way back when dinosaurs roamed the earth, they met downstairs in the house. They quickly outgrew the location and added a ginormous room onto the front of the house. Today, the first two levels of the house are used for church purposes and the upper two make up the church parsonage.

--This follows my previous point: we'll be living on site! This should be an interesting adventure full of advantages and challenges as well.

--And I'll just end on this: there's no yard but one of the little known gems of the parsonage is that it has a roof top terrace....lounge chair and chilled drink, I hear you calling my name...