September has left the building and it took October right along with it. No seriously, where have these months gone?? Fall has been busy in the Sanders household. Some fun things like a Halloween shindig this past weekend. Some not so fun things like Livia getting sick this past week for the first time (hello torture!). Something that has been for a long time in the works but only took shape at the end of August (and thus contributing to the busyness) is a project I've been working on in our church's nursery. A couple of years ago Christiane, an awesome lady from my church, asked me if I'd consider coming on board with her in co-leading the church nursery (apparently rumor has it that I like kids or something). I told her yes but on one timid condition...could we please makeover just about the ugliest nursery I've ever seen? (may or may not have been said in those terms...) Who knew but Christiane was just waiting for someone to wrangle this room into something cute.

The room started out as a youth group room back when dinosaurs roamed the earth... Check out this amazing wall mural (it screamed baby/toddler, I know...): 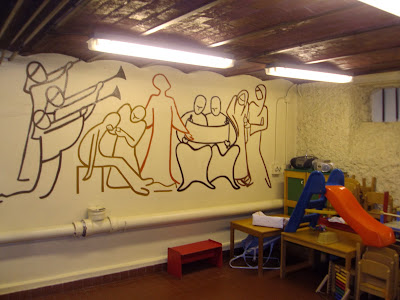 If the room looks yellow to you it's because there is only a tiny window (really more of an escape latch just in case the zombie apocalypse happens anytime soon) which means a serious lack of light and to top off the situation, the walls were what I like to call dirty cream/I want to throw up/not quite yellow but far from off-white... Plus did I mention the ceiling was painted brown brick? A gorgeous combo, let me tell ya. 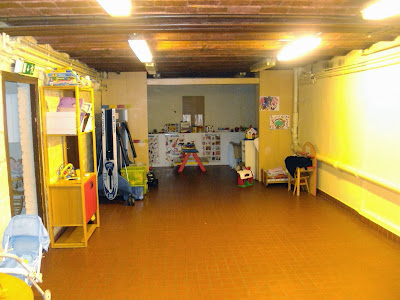 My plan was to attack the oppressive feeling the room conveyed as well as ad some much needed toy storage. Because, well, this is what I was working with (can you say bare??): 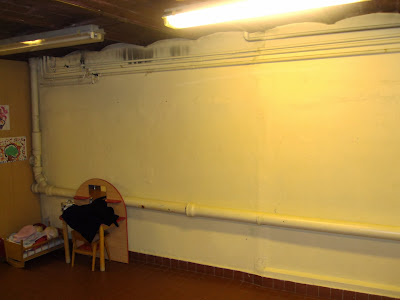 Basically we started by dousing the room in white paint and that alone made a huge difference. Here's what it's looking like these days: 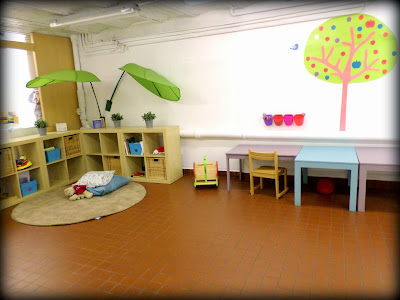 I've been trying to play around with a garden theme because in French it's called a "jardin d'enfants" (garden of children). I like the idea that just as a garden grows, we're growing little souls that will one day (hopefully) embrace Christ as their creator. Planting seeds and all that jazz. 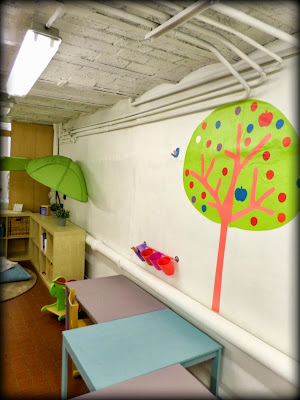 The tree is actually just a wall sticker so it can peel right off whenever we want to change things up and the Ikea cups/wall bar are fabulous for holding our markers and crayons in. 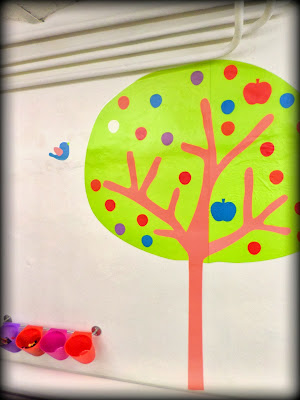 A few more befores and afters... 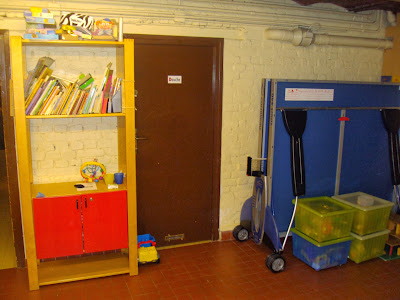 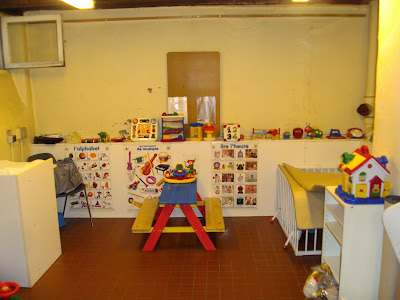 That was the small baby corner--not the most inviting environment for new mamas and papas... I simplified things up back there and added a couple of nursing chairs. The bookcases make for a natural separation between to two spaces which is a good thing because our nursery is for ages 3 months to 3 years. 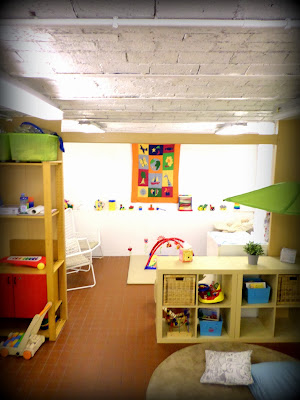 Here's the book corner I made: 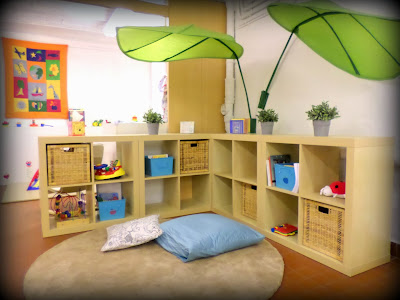 I wanted to create a nice happy and calm spot for some of the kids to relax in while at the same time having a natural meeting place in case we want to sing songs or look at a bible story together. (Hello toy storage!!) 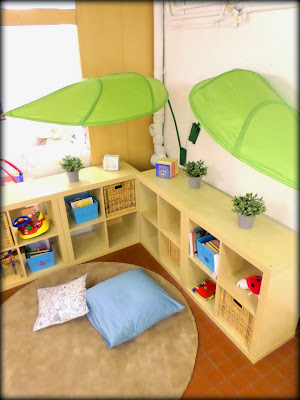 On the other side of a very long and narrow room we kept most of the same furniture but with a new paint job to freshen things up a bit. This is supposed to be the more active part of the room. 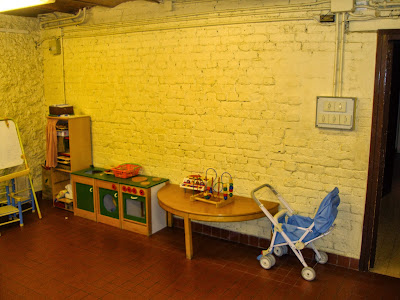 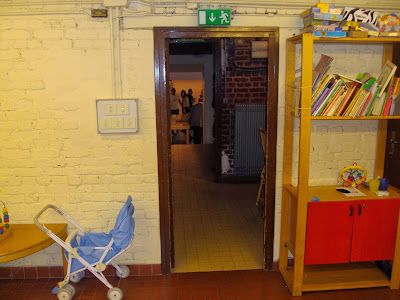 So far it's gone over pretty well with the kiddos so I'm excited to throw in a few more finishing touches along the way! It's so fun to finally feel like I'm finding more of my niche in our church community. A lot of work, but so worth it :) 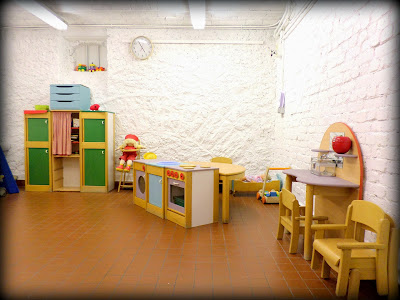