Charis is in town...

This would be a loong overdue post. Both in timing and content. But hey, you know how that whole life things happens, so I'm forgiven, right? Awhile ago I  mentioned that my fubulous (fun + fabulous = fubulous in Talia's world) sister in Christ, Charis, aka the BabyWhisperer had paid us a visit. She was our lovely babysitter during our first 'real' date out since the Livster came into the picture. Since Charis is a seasoned Paris visitor (this was her third time out here) we decided to shake things up a bit and forgo the classic sites. Here were a few highlights...

Zee Promenade Plantée:
Let's start in Paris, shall we? This green-way actually used to be a raised railroad track connecting two different stations on top of a giant viaduct. Once the raised tracks lost out to the metro, they had the brilliant idea to turn the tracks into a walking trail and the viaduct part into art galleries below. What I love about it is that the trail puts you mid level with the buildings around, creating a combo of being in the city and not at all at the same time. It'd be like my own personal secret garden if a lot of Parisians didn't already know about it. 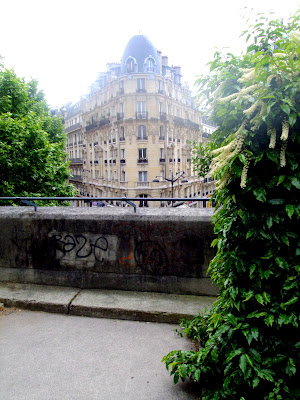 Admit it: we are Webster's definition of cool. 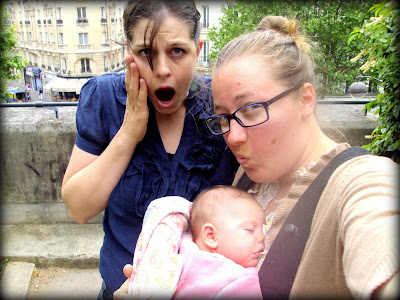 Fat Tire Bike Tours
To keep up the active theme we decided to take a night tour of the city on bikes with none other than the ultra cool Fat Tire Bike Tours (I say ultra cool because my fubulous friend Kelsey works there). I'd done a day tour before but never the night one. We should call it more of an evening ride because really, when you consider that the sun sets around 10:30 or 11 in the summer here, it's not exactly pitch black or anything. Here is Charis with her excited face ready to take on Parisian taxis. 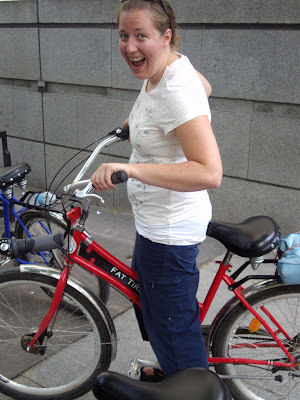 She even managed to keep up that face despite my attempts to eat her back bike tire. Ps. I should get extra credit points for terrorizing the Parisian streets and taking a pic of it at the same time, right? 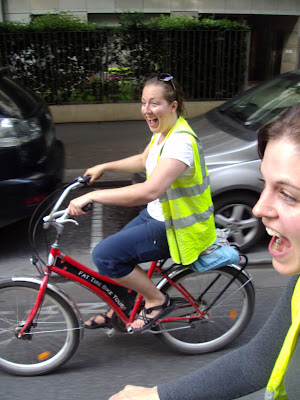 Here's our lovely guide Kelsey (aka Kelsoroni if you want to sound like you have an in with her). Okay, she normally works in the office but she totally did a stellar job as assistant guide. She also has her excited face on. Maybe it's because she secretly pregnant in this pic but no one but  Charis and I know. Muahaha the power of secrets (I can say it now because it's made it to facebook, and you know it's official when it's made it to facebook)... 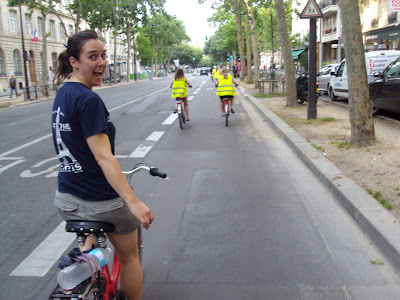 The tour was really great--you basically bike all over central Paris with a couple of stops along the way (one is ice cream!)... 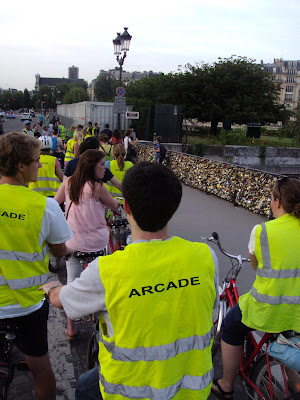 The city looks really pretty at dusk. After the biking part was mostly done we all headed onto some good ol' Bateaux Mouches for a little cruise down the Seine. Ahh, good times... 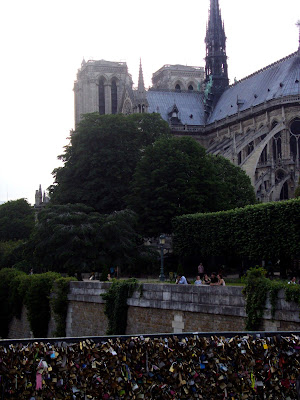 Fort-Mahon-Plage:
But our adventures did not just take place in Paris... Honestly, what is June without a trip to the beach? Here we are at the tiny beach town of Fort-Mahon-Plage in the Picardy region. Some definite good times were had by our sandy feet here. 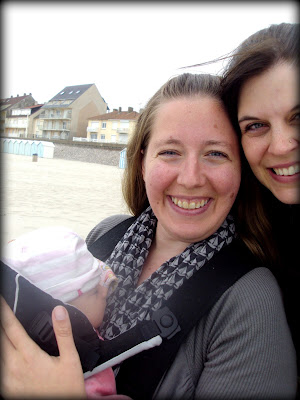 Liv also enjoyed her beach trip. Being blindly white from her trip to the womb she decided a little tanning was in order. Unfortunately the weather didn't quite cooperate with her but she doesn't know that. 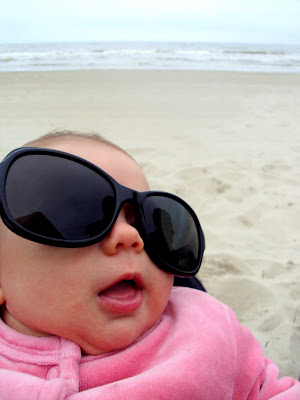 Speaking of weather not cooperating, it wasn't really the weather for ice cream either. Like mother like daughter I guess... 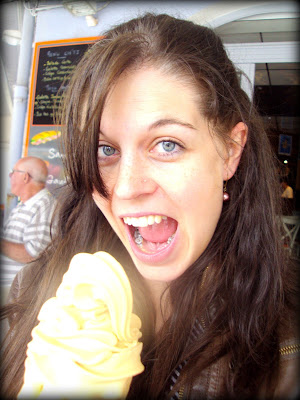 And father. Please appreciate his ice cream devouring face for just a second. 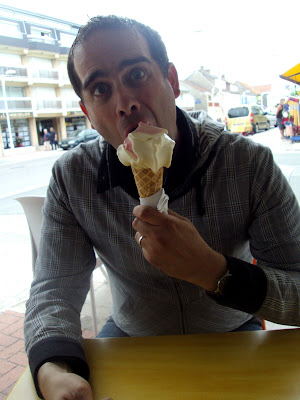 Amiens:
Next stop: Amiens! Also in Picardy and let me tell ya, I definitely fell in love with this place! So for all you who think 'seen one European town, seen 'em all', you'd be wrong. Amiens was great. It had this great small town meets big city vibe to it which I loved. Plus lots of water, which who doesn't love water?? 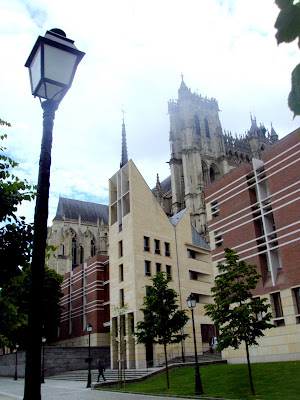 Slight pit stop for the Livster to get all her bodily fluids in order... 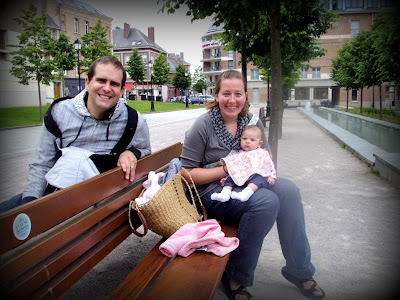 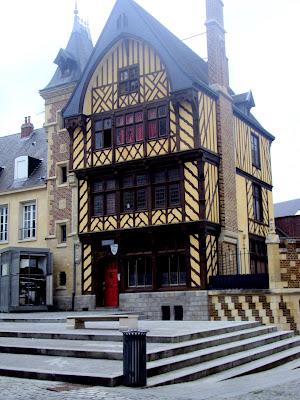 Here's the cathedral in the city center. 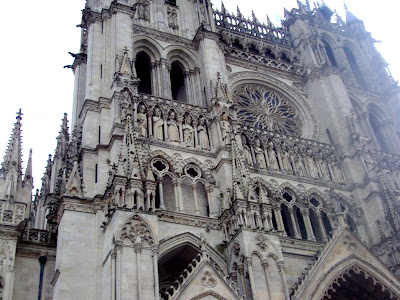 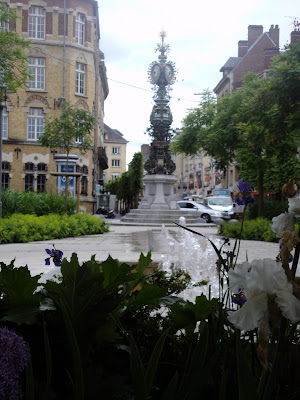 Houses on the banks of the canal. 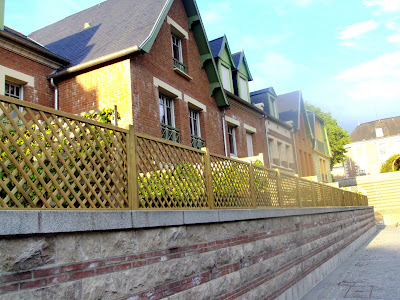 I loved all of the brick everywhere. And the water--did I already mention that? 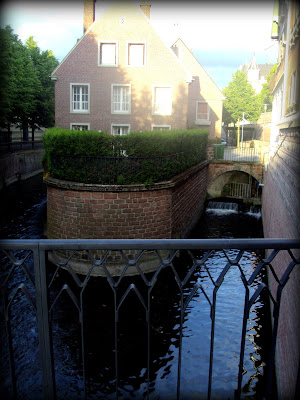 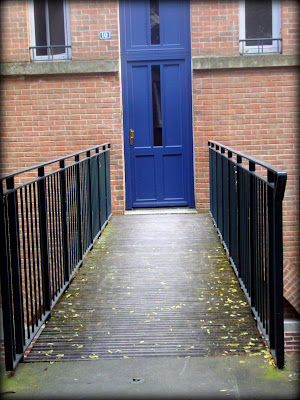 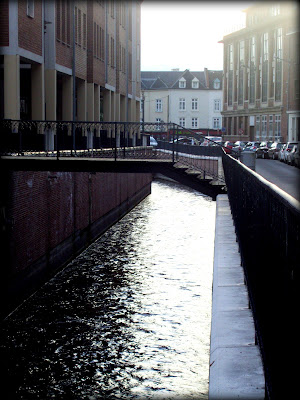 Well that'd be some of those highlights of our little trip with Charis. And a great time was had by all.