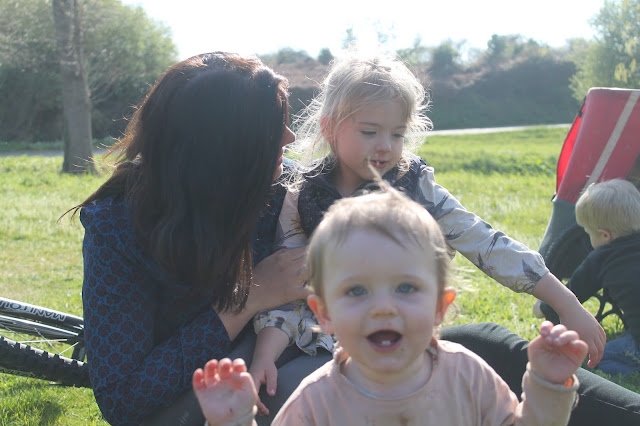 Before you think that I’m going to pull any holier than thou stuff on you, you should probably know that just last week while walking home from Livia’s school I discovered a spoon floating around in my blouse. Said spoon had somehow been dropped in by my one year old while I was holding her and getting ready to leave the house about an hour an a half prior. So yes, I had walked to her school, chatted in detail with her teacher and had managed to get about halfway home all before I realized that a spoon had accompanied me. And before you think that it’s an isolated incident, just know that I collect spoon incidents (not to be confused with the false rumor the I collect small spoons but I digress) about every other day. Clearly, I have issues. Clearly, I do not have my stuff altogether.
Now that confessional is over, lets move on to lent (I’m in a Catholic mood today, I guess). Recently my husband, Matt, and I decided to experiment with Lent this year. I know that Easter feels long behind us, but it’s taken me a little while to get my thoughts together on this (I blame mommy brain and sleep deprivation). As an evangelical protestant, I had never actually done Lent before now. For those of you not really familiar with it, Lent is the 40 day period leading up to Easter Sunday every year. The idea is to choose to take out something (or somethings) during that time that you feel is taking an unhealthy presence in your life and to replace it with more of what is supposed to be there, i.e. God. Not that the ‘something’ in and of itself is bad but the priority that it’s taking in your life is unhealthy.

For Matt and I, it was screens. Because let’s be honest here: with littles in the house, when bedtime has finally rolled around and passed, you have about all the leftover energy of a slug. I felt so often that I needed some screen time to ‘unwind’ because I didn’t have any oomph in me for anything else. I also knew that, when repeated night after night, I was starting to have the sneaky suspicion that there was more to life than blogs and netflix subscriptions. There was this after a junkfood binge type of feeling and it depressed me to look too closely at how often evenings slipped through my fingertips.

So I, alongside my husband, decided to do a lent experiment: eliminate all tv/netflix except for 2 nights a week. One was for me on a night when Matt had evening meetings (a frequent occurrence for a pastor) and one episode we would watch together. We also allowed for about a half hour of morning news before work everyday. Maybe this sounds like still a lot of tv to you but for us it was like moving to some remote part of the himalayas.
Here’s what I learned:

1)      It actually wasn’t as hard doing it as it was thinking about doing it. Like I thought it would be the techie equivalent of cutting out sugar from my diet but I didn’t go into extreme withdrawals like I thought I would. Sure at times it was hard, but mostly it was just a question of “well what do I do instead?”
2)      Which leads me to point number two: I actually got bored. Which could seem confusing with what I just said about it not being as hard as I thought but bear with me. It actually wasn’t that bad to be bored. Because more often than not, I decided to just turn in and go to bed instead. It’s like all this time I’d been subconsciously needing to prove that I could hack sleep deprivation when really I could have actually—gasp—been getting a full night’s rest (or at least a darn good start...Isaline is currently teething after all). Low and behold, extra zzz’s gave me energy for other things, like tackling that closet project or reading a book that had been on my list since the beginning of time.
3)      I rediscovered anticipation. Remember those tv nights back in the day? In college I and my roommates would all pile onto our hand me down couches to watch an episode of Gilmore Girls together. It was so much more than just tv; it was the chance to hang out, eat junk food and discuss in detail the inner workings of Rory’s latest love interest. Now I sit in front of my computer to watch Netflix on demand. And that 14 seconds before the next episode starts automatically? Killer…
4)      Life got really slooow. Like super slow. Instead of my precious “the kids are finally in bed” time flying by, the evening suddenly felt twice as long. I realized that I (like a lot of folks out there) have gotten trained to equate fast with better. To think I needed constant entertainment or else I’d just fall to pieces. But slow felt really good. And really restful. It gave me margin on the edges of my sanity when previously mentioned one year old got ahold of her sister’s flower pot and turned it upside down. It made me feel like a better mom and a less cranky wife. It fed my soul.
5)      This is the part where I’d love to tell you that God just popped into my living room one night and gave me this awesome lent epiphany. But if there’s one thing I learned throughout my screen binge, it’s that slow can be good. And though I didn’t hear the angels singing, I know that with his grace, I’m inching my way closer towards him. Clearing out the screen clutter has been like clearing out some of the clutter in my soul to make room for more of his voice, his love, his lavish grace in my life.

I may or may not have binged on Netflix episodes the week after Easter. I plead the fifth. Now that lent is over I don’t want to just go back to my old ways. But neither do I feel like I need to be beaten down by a rigid system. Christianity is not about systems or rules or spiritual whips. So it’s going to be a bit of dance. Me, my tv, and the Holy Spirit. I can’t promise perfection but I’ll let you know what we figure out!
Posted by Talia at 9:46 PM