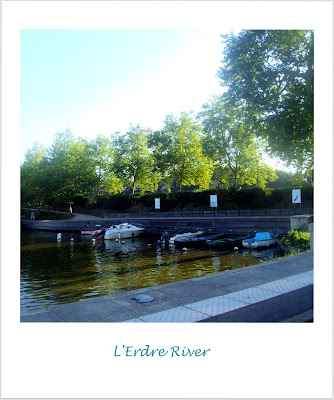 Well God just has a sense of humor, now doesn't he? I guess that might be because he created humor in the first place... Ok, moving on to my actual point (yes, every once in awhile I do have one!). Here I was getting ready to whine a bit about how I've felt so uninspired to write lately, poor me, yada yada yada when God just up and decided to give me a bit more material. You see I went kayaking with my mother in law this week.

Let's picture it, shall we? We pull up to the beautiful, scenic view pictured above ready to kick some kayak butt. It's slim pickin's as far as kayaks go (due to going in the later afternoon) but our spirits our high. We confidently reassure kayak girl that we have had previous experience and that all will be fine. Heck, I took a class in college--while maybe not making me an expert, it does remove me from the realm of the ridiculous, right?


I'm a little shaky getting in and I definitely had forgotten about the whole butt first rule, but I'm thinking--give me a few minutes and it'll all come back. Well it does, in theory. In practice... hmm. We could use a bit more work. 15 ft out and I'm already turning in circles. Ok, honestly. I start doing 2 strokes on the opposite side for every 1 on the turning side. Now this is getting personal. I try in vain to catch up with Agnès, who is by now light years ahead of me. Somehow I manage to fervently spin over to her.

At this point she says something like "wow, look how low your kayak is sitting in the water compared to mine". That's when I realize that she's made a good point:  I've got a whole kiddie pool going on next to my legs. It must have been from all that splashing and turning. We quickly decide to row for a nearby shore where it'll be easy to empty it.

I'm 10 ft away when I start capsizing.

It's at this point in time that I remember my first experience in Canoeing and Kayaking Class when my foot got stuck in the drifting kayak and my other foot, well, stayed on the dock. That day I got as close as I'll ever get to doing the splits before a full dunking in the Seattle canal. And then there was the time where I got distracted and flipped the canoe. Perhaps this would have been a good thing to remember from the get-go. At least my disaster training kicked in (that would be funded by the A.E.C. [Awkward Experience Club]) and I quickly prioritized the essentials: my shoes. Then paddle and semi submerged kayak, of course. 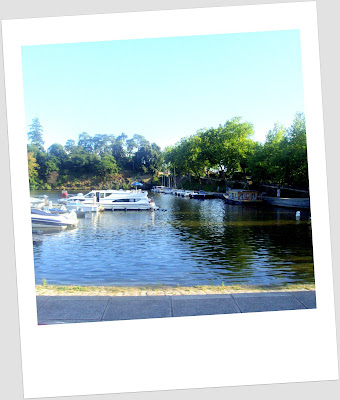 Wonder women that we are, we manage to get the kayak turned and emptied. Agnès very nicely trades kayaks with me because we're convinced that mine has issues (the guy who used it before me had had issues as well). Then it's back to business and out on the water again. This time things go better for about 30 seconds longer. I resist the urge to scream and attempt to patiently better my strokes in an effort to stop the merry go round.
No such luck. Agnès, while occasionally stopped by a push from the current for the most part breezes onward. "Sit up straighter" "Not so intense" "Pull from far in front" I try all the advice; nothing helps. Nothing like eating humble pie every now and again, I decide (for the sake of my sanity).

Then I start capsizing again. Only this time, I'm in the middle of the river under a bridge.

With a feeble yell at Agnes I start swimming for a ladder I see attached to the side of the bridge's bank. This time emptying out the kayak won't be so easy. Being one who likes a challenge and the occasional stupid idea, I decide to climb the ladder and empty it from atop the bank. I am kayak woman, hear me roar. Minor detail: there's about 5 ft of distance from the water to the top of the bank. No prob, I think. Very carefully I edge the kayak up each rung of the ladder while Agnès steadies it below. Gently I slide it off the ladder and rest the tip of it on the bank's stone edge. Turning it requires some awkward straddling and hugging but I get 'er done. Little do I realize that as I'm emptying my kayak, I'm actually pouring it into Agnès' kayak. Thankfully, she has less of a talent for capsizing (it must be my spiritual gift, really) and she remains afloat.

Just about the time when we had finally gotten the kayak emptied, upright, and waiting beside the ladder, I realize that there is an old man with his wife next to me on the side walk taking pictures of the whole darn ordeal. I must be more exciting than fishing, I guess. I manage to give the guy my best drowned rat of a smile and get back in without diving in for a third time. We decide to head back to kayak girl and just as we're coming around the bend of the bridge I see another fellow member of the A.E.C. who has also biffed it--in front of three girls no less--I smile to myself, feeling a bit less alone, and wonder how in the world I passed Canoeing and Kayaking Class with flying colors.

SO well said! You do have a gift for telling stories. I laughed almost as much as when we actually were in the water. Thank you for being such good sports! I look forward to new adventures together! Agnès

Ahh, thanks! It was too good of a story not to tell :) I'm looking forward to many more adventures to come as well! And I haven't given up on kayaking just yet!