Why I love living in Paris 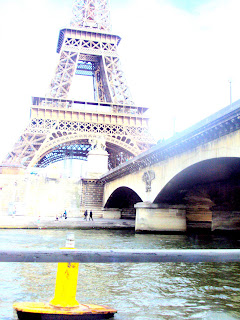 If I only had a dime for every time I got the reaction "Oh my gosh, you live in Paris? Your life must be perfect!" Combine that with another dime for every other person who tells me, "Oh wow--Paris, man, I'm sorry. What's it like living all the time with those snobs?" and I would be one rich girl (not a bad idea--maybe I should start charging!). So to prove to you all that Paris is neither heaven nor hell on earth I've come up with two lists, the first being my 10 favorite things about living in this city/country. That of course leaves the 10 things I hate about living in this city/country for next time.

Okay, the positive (and please don't tell me that just because you went on some tour with your aunt Millie 4 years ago and you spent three days and 5 traumatic encounters with the tourism industry in the city of lights that now you know the place, just like you know what all French people are like just because you chatted [or tried to] with the thin mustachy man at the metro ticketing booth).

Ahh, thanks Lynette! That's such a sweet compliment :) Feel free to come back again anytime! We miss you too!