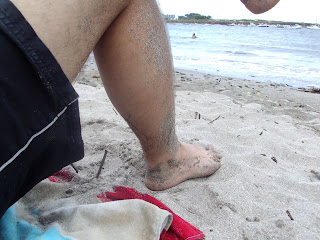 Well, vacay is over...alas. I've only been back a week but already it feels like light years ago! And what a rough vacation it was, too: 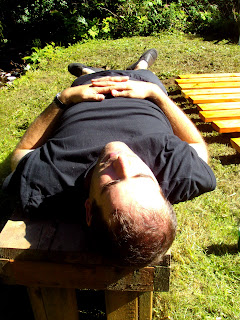 But these things must reach an end and the task of being an adult coming back to reality inevitably occurs. And boy does it occur. I hadn't been off the plane for 24 hours before we were already repacking and hopping (really it was more like a slow dragging of the feet while Matt yanked on my arm as we were late, again) onto a train bound for the north of France. 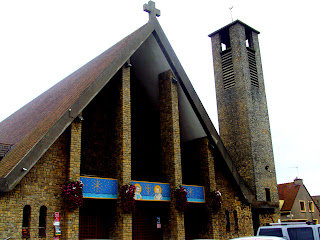 Why the north of France you ask? Well when you're married to a pastor, weddings become just about as second nature and frequent as taking out the compost. Okay so I don't really ever take out the compost (my fellow apartment dwellers might not appreciate it if I did) but you get the idea. Friends of ours were getting married up in ch'ti country and I was about as psyched as you could be in my jet lagged state to see what a wedding up north was all about. It turned out to be a rather memorable affair for several reasons. The first was that it was a protestant, evangelical wedding taking place in the local catholic church (pictured above--very different from other churches I've seen in France...must be a northern thing). 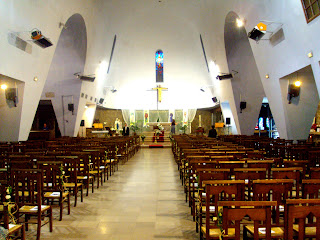 Here she be in all her inner glory. The priest gave a very nice welcome and then opened it up to the evangelicals to get the party started. And they definitely did--it was the most relaxed and informal ceremony that I've ever seen in France--just about every time the groom got the microphone we all cracked up. But here's the kicker--this formal catholic church is huge and echoey. Which is probably why liturgy and the like is so slow and always the same thing...because otherwise no one would be able to make out anything they said at all! I'd like to say that only about half the jokes were lost on me but lets be real--even with the mic I only caught about 4 % of what was said a midst bouncing echoes and the chatter of everyone after about row 5 asking "What was that? What did he just say?" 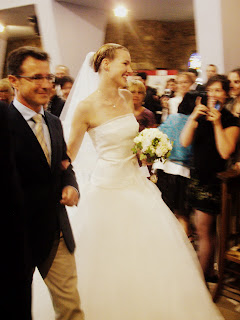 But lets continue on to the reception. If you're not familiar with a French reception, here's the breakdown: everything starts with a vin d'honneur, usually either near the church or on the same site as the formal meal. This is the part of a French wedding that Talia just loves. I've got all whole strategy: get Matt talking with our common (or his, let's be honest) acquaintances, while I make a break for the towers of delicious appetizers and a glass of champagne. (I also like to rotate buffet tables so the waitstaff doesn't make me out for the true oinker that I am) The plan went all wrong when I realized that the one thing being served at this vin d'honneur was mini hot dog buns with a slab of ham. Apparently, it's a northern thing (sensing a theme?). But not to worry, I wasn't bored for very long before the flash mob came out of the closet. I kind of realized a bit late that we were all supposed to be practicing for the group dance and jumped in somewhere near the back...which worked fine for most of it until we switched directions. Oh well, I blamed it on the jet lag. 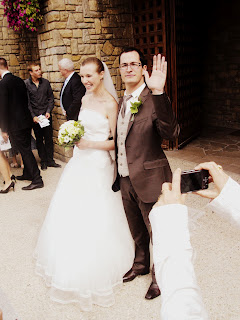 Now (at last!) comes the meal. This is the moment in the festivities where the real friends are separated from the wedding crashers. Here is the order or courses in a typical French wedding meal: starter course (usually soup or salad), possibly one more starter, what we would call the "entree", cheese and lettuce with a vinaigrette dressing/fresh fruit, dessert (aka cake and whatnot), sometimes the "mounted piece" aka a French wedding cake, and then coffee. You'd think that people would already have sore butts by the end of all that but in order to prolong the soreness there are animations in between each course. Yes, these can range between your awesomely funny skits or tear jerking slide shows and what you picture as the lamest party game you could ever play.

Usually it's a combo but occasionally you get all one of the other. Thankfully, this one leaned on the awesome side or else I'm not sure I would have made it through the night (after all you only start the first course around 8 or 8:30pm). Among the animations were video clips that could have actually been professional they were so good, a 40 person family choir, and the bride and groom's first dance replicating a tap dancing scene from the movie The Artist. But hands down, the best animation came from a friend of the groom who has an unusual gift for getting into events he really shouldn't be at. I'm not talking like a fundraiser for vegan awareness but rather, VIP red carpet events. 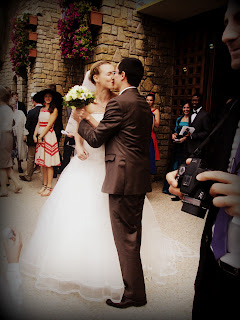 So he starts out by announcing that even though it's hard deciding who to invite when you're making a wedding guest list, there were a few people who weren't invited that would have liked to have been there. We're all kinda wondering where exactly he's going with this when he starts the video and a minor celebrity's name appears on the screen. Pretty cool when it turns out to be them personally wishing all the best to our just married friends. But cooler yet when another name and then another  appears, each time a bit higher on the celebrity ladder. Not being French and knowing who all these people are I'm having the most fun just watching everyone's reactions get bigger and bigger and the VIP list going higher and higher. Until he gets to people I actually know... like the actor from The Actor (oh what a punner I am..). And then comes a name that everyone really freaks out at...yes, the president of France personally wished his best for our friends. Good thing the next course arrived soon after that, because what a hard act to follow. 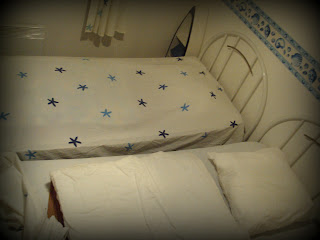 The courses finished up somewhere around 1:30 to 2 am (no, I'm not kidding you--the main course probably wasn't even served til midnight). Of course, never mind the fact that I had just stepped off an airplane the day before and there's 9 hours difference between France and Oregon. Like the good little sports we are, Matt and I stumbled out to the dance floor and worked off some dessert. Yeah, that lasted for about 45 minutes before we set our pooped little behinds back in our chairs for some chatting time, secretly hoping our ride would be ready to head back to the gite that we had all rented for the night. But judging by the way our driver was dancing he wasn't going anywhere anytime soon. I'll be honest--it gave me much longed for time to consider what exactly a gite was anyways, decide I really needed to shave my legs, mentally write my shopping list, and read the gite sleep arrangement breakdown, in the process discovering that Matt and I were sleeping in different rooms (you know, boys in one room girls in the other). One of our friends gave up and decided to take a nap in a nearby closet that he'd found. At about 3:30am I gave up all attempts at appearing like the cool night owl I'm not and tried to sleep with my head on the dinner table.  Our hosts told us later that with one friend asleep in the closet, one asleep on the table, and Matt with a very interesting glazed over crazy eye look going on, they decided that heading back might be a good idea.
That was at 4 am. In the end I discovered that gite is just a fancy French way of saying a normal house with twenty million twin beds stuck in it and that Matt and I were going to sleep together after all (you know what I mean) in side by side twin beds (pictured above). Seeing as the closet was looking like a desirable sleeping locale at the end of the festivities there, the room to our self looked like heaven, so  no complaints. And thus ended our first weekend back.
Posted by Tal at 6:21 PM