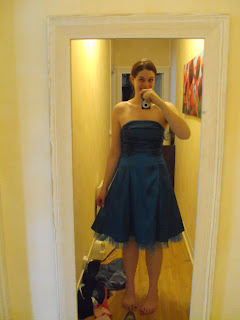 If you're expecting me to say something profound after that title post then you probably don't know me very well by now...unless you're a girl and then you know that finding a bridesmaid dress can actually be a profound experience. Specifically when living in France.
I say that because while Paris happens to be the fashion capital of the world, there is apparently a color ban on clothing in the city of love (this is where I say something corny like that's because love is blind... [insert canned laughter]). Parisians have an almost obsessive relationship with the color black. What's worse is that you live here long enough and you start to become one of them. What color am I wearing right now? And seriously the minute you mix more than one color into your wardrobe, warning bells start going off and heaven forbid you look too flashy. I mean, someone just might notice you out of that sea of brown and black.
All this to say that really when my sis asked me to get a blue dress for her upcoming nuptials what I really should have done was start hunting then and there. Because, you see, Americans like color. Ask any European, it's the easiest way to spot them out of the crowd (okay, that and speaking loud English that is). But alas, I didn't actually end up looking for my dress in the states... 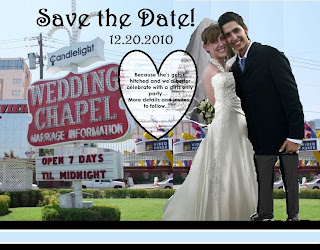 Stupidly, I came back to Europe thinking that four months was plenty of time to find a blue evening dress in Paris. After all, they have dresses and evenings over here right? And sometimes they combine the two? The first couple months of casual looking there wasn't much panicking (okay, lets face it, it was more like the first 3 and then some...). When the country-wide sales hit, I thought it would provide the perfect opportunity to find it.
No such luck. My next move was to look online. The World Wide Web has everything right? Wrong-o. That's when I started suspecting internet conspiracy. Having not the least idea of where else to look I finally turned to my boss, who actually happened to be dress shopping for a wedding herself. That's when I learned that it helps when you ask frenchies. Apparently the color ban rebels were all hanging out on this exclusively evening dress street.
So I decided to follow her advice and check out the street for myself. My first stop was a place called Sunshine and lit up with multiple neon lights. Forgetting the neon lights, I was on cloud nine just to discover a whole rainbow of color. After some very interesting dresses, one ripped shoulder strap, and a couple of sequin strips no longer around, I attempted not to let discouragement get to me.
Sunshine's neighbor turned out to be another evening dress shop, this one a little more promising that the last. As I was scouring over the tea length options the owner approached me. Seeing the look on my face he actually apologized for offering to help and said he'd let me look in peace! (now if only that would happen all the time, I'd be perfectly content!) Of course, Sparky just couldn't hold back for long because soon he was pointing out where all the tea length dresses were located, yada yada yada... I considered flashing him my ring and mentioning how happily married I am but decided that talking back to him would just encourage the guy.
The first of many surprises was that I discovered my dressing room curtain didn't fully shut and was about the size of a straight-jacket. Okay, so maybe I'm exaggerating a little here...not much though because a pail of dirty water was directly behind me making it difficult to move, let alone change one's clothes. Not to mention what would happen if one of those frilly unmentionables dropped in the bucket? But the worst thing was the lack of a mirror in the dressing "room". Peaking my head out of the straight-jacket I looked for clear opportunity to make a dash for the mirror while my new boyfriend was occupied. This wasn't the easiest feat in the world because there was a whole posse of teenage girls checking out their ridiculously skinny butts in the mirror. Finally a moment came where both parties were occupied and I did a quick run and look over out at the mirror.
To my great delight I liked the dress and it was a mere 40 bucks...and since there was no way I was going through that ordeal again with dress number two I quickly redressed (steering clear of the pail of course!), paid for that baby, and hopped on my bike to go back home. 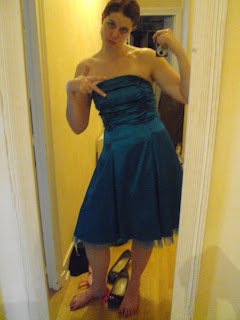 So now Talia is reaadaay for this happenin' wedding... And not a moment too soon because the wedding is less than three weeks away. Did I mention that it'll be in Chile? Which means more fun adventures and cultural misunderstandings to write about soon! Let the Spanglish fun begin...
Posted by Tal at 7:42 PM

Are you sure it's blue?--it looks black.